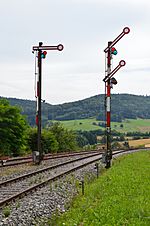 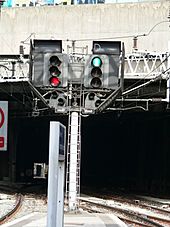 A railway signal is a visual display device that conveys instructions or provides advance warning of instructions regarding the driver’s authority to proceed. The driver interprets the signal's indication and acts accordingly. Typically, a signal might inform the driver of the speed at which the train may safely proceed or it may instruct the driver to stop.

Application and positioning of signals 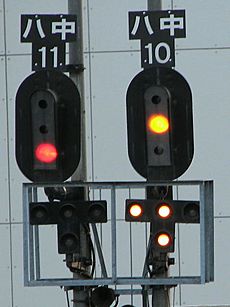 The additional lights on Japanese signal 10 show that the points are set for the left route at the next junction.

Originally, signals displayed simple stop or proceed indications. As traffic density increased, this proved to be too limiting and refinements were added. One such refinement was the addition of distant signals on the approach to stop signals. The distant signal gave the driver warning that he was approaching a signal which might require a stop. This allowed for an overall increase in speed, since train drivers no longer had to drive at a speed within sighting distance of the stop signal.

Under timetable and train order operation, the signals did not directly convey orders to the train crew. Instead, they directed the crew to pick up orders, possibly stopping to do so if the order warranted it.

Signals are used to indicate one or more of the following: 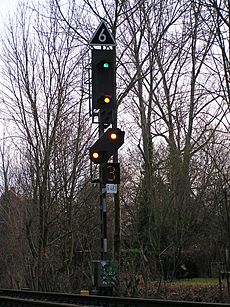 Some signals can convey large amounts of information. These German signals show that the train should advance (green light), the speed limit past this signal is 60 km/h (top yellow light + top number plate), the speed limit will be reduced to 30 km/h ahead (yellow illuminated indicator), and - at that specific station - that the train is entering a stub track and should slow accordingly (double yellow lights at the bottom).

Signals can be placed:

'Running lines' are usually continuously signalled. Each line of a double track railway is normally signalled in one direction only, with all signals facing the same direction on either line. Where bidirectional signalling is installed, signals face in both directions on both tracks (sometimes known as 'reversible working' where lines are not normally used for bidirectional working). Signals are generally not provided for controlling movements within sidings or yard areas.

All content from Kiddle encyclopedia articles (including the article images and facts) can be freely used under Attribution-ShareAlike license, unless stated otherwise. Cite this article:
Railway signal Facts for Kids. Kiddle Encyclopedia.