Part of the historical region of Muntenia, it is located 56 km (35 mi) north of Bucharest. The area of the city is around 60 km2. It borders the Blejoi village in the north, Bărcănești and Brazi villages in the south, Târgșoru Vechi in the west and Bucov village in the east. Ploiești has direct access to the Prahova Valley, one of the most important alpine tourism areas in Romania.

Ploiești is an important transport hub, linking Bucharest with Transylvania and Moldavia. According to the 2011 Romanian census, there were 201,226 people living within the city of Ploiești, making it the 9th most populous in the country.

Though likely settled much earlier, Ploiești first appeared in documents in the 16th century, during the reign of Mihai Viteazul (Michael the Brave), Prince of Wallachia (r.  1593  –  1601). It flourished as a center for trade and handicraft-manufacturing in the 17th and 18th centuries. The road connecting Ploiești to Brașov opened in 1864, and the railway arrived in 1882. Many schools and hospitals date from this time.

In the mid-19th century the Ploiești region became one of the world's leading oil extraction and refinery sites. The Mehedințeanu brothers opened the world's first large refinery at Ploiești in 1856–1857. History also remembers the city as the site of the self-styled Republic of Ploiești, a short-lived 1870 revolt against the Romanian monarchy.

During World War I Ploiești's oil production made it a target when the Central Powers invaded Romania in 1916, but a British Army operation under John Norton-Griffiths destroyed production and sabotaged much of the infrastructure of the industry. 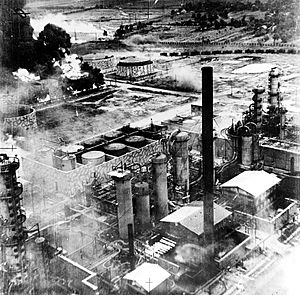 Although badly damaged after the November 1940 earthquake, the city was a significant source of oil for Nazi Germany during much of World War II. The Allies made Ploiești a target of the Oil campaign of World War II and attacked it repeatedly, such as during the HALPRO (June 1942) and Operation Tidal Wave (1 August 1943) at a great loss, without producing any significant delay in operation or production. Soviet troops captured Ploiești in August 1944.

Following the war, the new Communist régime of Romania nationalised the oil industry, which had largely been privately owned, and made massive investments in the oil and petroleum industry in a bid to modernise the country and to repair the war damage.

The population of Ploiești went from 56,460, as indicated by the December 1912 census returns, up to 252,715 in January 1992. Since the fall of Communism, however, the city's population continues to gently fall due both to emigration and to a declining birth rate. At the 2002 census, the population reduced to 232,527. As of 2011 census data, Ploiești has a population of 197,542, while the proposed Ploiești metropolitan area would have a population of 266,457.

The majority of the inhabitants are Romanians (90.64%), but a Roma minority (2.4%) is also present in several neighborhoods of the city, predominantly in Bereasca, Mimiu and Radu de la Afumați. For 6.65% of the population, the ethnicity is unknown. Most of the people living in Ploiești are Orthodox Christians (90.7%). 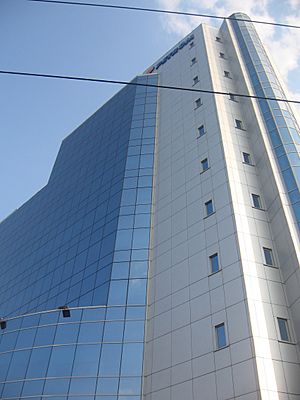 Former headquarters of Petrom, a Romanian oil company and the largest corporation in the country

After the Romanian Revolution of 1989, Ploiești experienced rapid economic lost due to bad government and investments from foreign companies. The city is situated at just 60 km (37 mi) north of Bucharest, with promising infrastructure projects currently underway. It is a strong industrial center, focused especially on the oil production and refining industry. Although oil production in the region is declining steadily, there is still a thriving processing industry with four operating oil refineries, linked by pipelines to Bucharest, the Black Sea port of Constanța and the Danube port of Giurgiu. Ploiești also has a long history as a textile manufacturing center.

The city has become a hub of foreign investment. Companies such as OMV-Petrom, Lukoil, Shell Gas, Timken, Yazaki, Coca-Cola, Efes Pilsener, British American Tobacco, Federal-Mogul, and Interbrew have operations there, and retailers like Carrefour, Metro, Selgros, Kaufland, Billa, Bricostore, Praktiker, Lidl, Obi, Auchan, Profi, Mega Image have found in Ploiești a continuously growing market, but the pay rate for employees is lower than expected. There are four McDonald's restaurants in Ploiești and three KFCs.

The German retailer Tengelmann built a depot in Ploiești to support a €200 million regional expansion plan. With its Interex operation, the French independent retailer Intermarché intends to become a distribution leader in the Balkans. In Romania the first Interex store was opened in June 2002 in Ploiești. The Interex depot and facilities were bought by Penny Market XXL in 2014.

Unilever has a detergent plant in Ploiești. By transferring their food production to Ploiești, the company will concentrate all its activities in Romania at the same location. At the beginning of March 2006, Unilever announced they would invest money to build one production center in Romania, and the construction of the new food plant is part of this plan.

In 1950, as a milestone in the development of the petroleum, hydrocarbon processing, and petrochemical industries, the Engineering and Design Institute for Oil Refineries and Petrochemical Plants, SC IPIP SA, a Romanian company with a large range of capabilities and experience, was established at Ploiești. 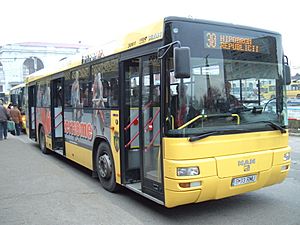 Ploiești is situated on the A3 motorway (partially completed as of Spring 2014), the main route to Romania's northern and western provinces and the Western EU. Henri Coandă International Airport is 45 km (28 mi) distant, and the ski resorts of the Prahova Valley can be reached in an hour's drive. Ploiești is the second most important railway center in the country after Bucharest, linking Bucharest with Transylvania and Moldavia. The city's public transportation system is run by TCE Ploiești and includes an extensive network of buses, trolleybuses and trams/streetcars. Ploiești's distinctive yellow bus fleet is one of the most modern in Southeastern Europe, providing connections to all areas within the city, for a daily average of 150,000 passengers. The municipal roads comprise over 800 streets with a total length of 324 km (201 mi). Around 5,300 vehicles transit Ploiești each day, with East and West ring belts diverting much traffic. The municipal vehicle fleet comprised 216 buses, 32 trams and 25 trolleybuses carrying about 70 millions passengers annually. There are 33 bus lines, with a total length of 415.46 km (258.15 mi); two trolley-bus lines having a total length of 19.9 km (12.4 mi) and two tram lines having a total length of 23.8 km (14.8 mi). 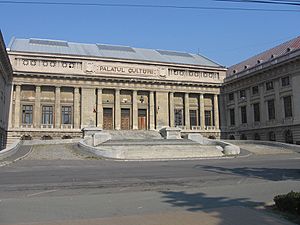 There are many cultural and architectural monuments, including the Cultural Palace; the Clock Museum, featuring a collection of clocks and watches gathered by Nicolae Simache; the Oil Museum; the Art Museum of Ploiești, donated by the Quintus family; and the Hagi Prodan Museum, dating to 1785: the property of a merchant named Ivan Hagi Prodan, it contains elements of old Romanian architecture and for a short time after World War I it hosted the first museum in Ploiești, "Prahova's Museum". In August 2011, Ploiești hosted the Golden Carpathian European Film & Fair and Goran Bregovic concert.

All content from Kiddle encyclopedia articles (including the article images and facts) can be freely used under Attribution-ShareAlike license, unless stated otherwise. Cite this article:
Ploiești Facts for Kids. Kiddle Encyclopedia.