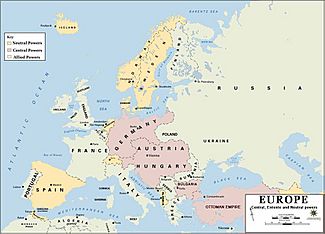 European military alliances in 1914. The Central Powers are shown in purple, the Allies in gray and neutral countries in yellow

The Central Powers were a group of nations fighting against the Allied Powers during World War I.

All content from Kiddle encyclopedia articles (including the article images and facts) can be freely used under Attribution-ShareAlike license, unless stated otherwise. Cite this article:
Central Powers Facts for Kids. Kiddle Encyclopedia.