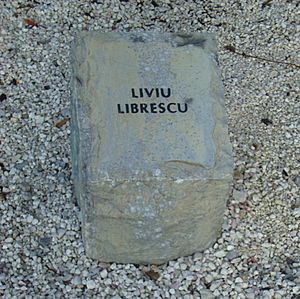 Liviu Librescu (Romanian pronunciation: [ˈlivju liˈbresku]; Hebrew: ליביו ליברסקו; August 18, 1930 – April 16, 2007) was a Romanian-born Israeli and American scientist and engineer. He was a professor whose major research fields were aeroelasticity and aerodynamics. He was born in Ploiești, Romania. He was Professor of Engineering Science and Mechanics at Virginia Tech.

He was a known academic in addition to being a survivor of the Holocaust, he was most widely known for his heroic actions during the Virginia Tech shootings, in which he held off the gunman, giving all but one of his students enough time to escape through the windows. Shot and killed during the attack, Librescu was awarded the Order of the Star of Romania, Romania's highest civilian honor.

All content from Kiddle encyclopedia articles (including the article images and facts) can be freely used under Attribution-ShareAlike license, unless stated otherwise. Cite this article:
Liviu Librescu Facts for Kids. Kiddle Encyclopedia.