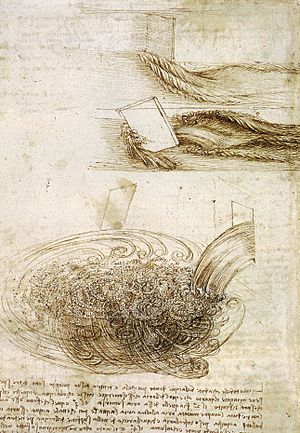 Fluid mechanics is the study of how fluids move and the forces on them. (Fluids include liquids and gases.)

The study of fluid mechanics goes back at least to the days of ancient Greece, when Archimedes made a beginning on fluid statics. However, fluid mechanics, especially fluid dynamics, is an active field of research with many unsolved or partly solved problems. Fluid mechanics can be mathematically complex. Sometimes it can best be solved by numerical analysis, typically using computers. A modern discipline, called Computational Fluid Dynamics (CFD), is devoted to this approach to solving fluid mechanics problems.

Fluid mechanics is a subdiscipline of continuum mechanics, as illustrated in the following table.

All content from Kiddle encyclopedia articles (including the article images and facts) can be freely used under Attribution-ShareAlike license, unless stated otherwise. Cite this article:
Fluid mechanics Facts for Kids. Kiddle Encyclopedia.