Daniel Bernoulli FRS ( 29 January 1700 – 17 March 1782) was a Swiss mathematician and physicist and was one of the many prominent mathematicians in the Bernoulli family. He is particularly remembered for his applications of mathematics to mechanics, especially fluid mechanics, and for his pioneering work in probability and statistics. His name is commemorated in the Bernoulli's principle, a particular example of the conservation of energy, which describes the mathematics of the mechanism underlying the operation of two important technologies of the 20th century: the carburetor and the airplane wing. 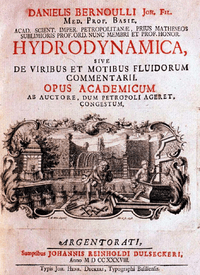 Daniel Bernoulli was born in Groningen, in the Netherlands, into a family of distinguished mathematicians. The Bernoulli family came originally from Antwerp, at that time in the Spanish Netherlands, but emigrated to escape the Spanish persecution of the Protestants. After a brief period in Frankfurt the family moved to Basel, in Switzerland.

Daniel was a son of Johann Bernoulli (one of the "early developers" of calculus) and a nephew of Jacob Bernoulli (who "was the first to discover the theory of probability"). He had two brothers, Niklaus and Johann II. Daniel Bernoulli was described by W. W. Rouse Ball as "by far the ablest of the younger Bernoullis". He is said to have had a bad relationship with his father. Upon both of them entering and tying for first place in a scientific contest at the University of Paris, Johann, unable to bear the "shame" of being compared Daniel's equal, banned Daniel from his house. Johann Bernoulli also plagiarized some key ideas from Daniel's book Hydrodynamica in his own book Hydraulica which he backdated to before Hydrodynamica. Despite Daniel's attempts at reconciliation, his father carried the grudge until his death.

Around schooling age, his father, Johann, encouraged him to study business, there being poor rewards awaiting a mathematician. However, Daniel refused, because he wanted to study mathematics. He later gave in to his father's wish and studied business. His father then asked him to study in medicine, and Daniel agreed under the condition that his father would teach him mathematics privately, which they continued for some time. Daniel studied medicine at Basel, Heidelberg, and Strasbourg, and earned a PhD in anatomy and botany in 1721.

He was a contemporary and close friend of Leonhard Euler. He went to St. Petersburg in 1724 as professor of mathematics, but was very unhappy there, and a temporary illness in 1733 gave him an excuse for leaving St. Petersburg. He returned to the University of Basel, where he successively held the chairs of medicine, metaphysics, and natural philosophy until his death.

In May, 1750 he was elected a Fellow of the Royal Society.

In Hydrodynamica (1738) he laid the basis for the kinetic theory of gases, and applied the idea to explain Boyle's law.

He worked with Euler on elasticity and the development of the Euler-Bernoulli beam equation. Bernoulli's principle is of critical use in aerodynamics.

According to Léon Brillouin, the principle of superposition was first stated by Daniel Bernoulli in 1753: "The general motion of a vibrating system is given by a superposition of its proper vibrations."

In 2002, Bernoulli was inducted into the International Air & Space Hall of Fame at the San Diego Air & Space Museum.

All content from Kiddle encyclopedia articles (including the article images and facts) can be freely used under Attribution-ShareAlike license, unless stated otherwise. Cite this article:
Daniel Bernoulli Facts for Kids. Kiddle Encyclopedia.