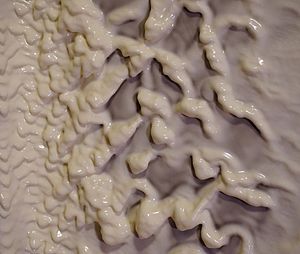 Paint is a non-Newttonian fluid. In non-Newtonian fluids viscosity varies with the stress they are exposed to. Paint which is under low stress will behave differently from paint that is under high stress. When a surface with paint turned from horizontal to vertical orientation, it will be exposed to stress from gravitation. Therefore, instead of slipping along the surface, it forms very large drops, that are very dense and almost solid. This creates the great effect that can be seen in the figure.

A non-Newtonian fluid is a thixotropic fluid which changes its viscosity when the forces on it change.

Other flow properties may also be affected. Most commonly viscosity of such fluids is not independent of the shear rate or the shear rate history. Examples of such fluids are blood, quicksand and certain components of cement. Many lubricants, ketchup, certain forms of dough and pudding also have this property.

The other kind of fluids that do not show this behavior are called Newtonian fluids.

All content from Kiddle encyclopedia articles (including the article images and facts) can be freely used under Attribution-ShareAlike license, unless stated otherwise. Cite this article:
Non-Newtonian fluid Facts for Kids. Kiddle Encyclopedia.