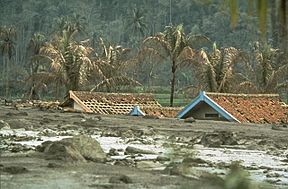 A lahar from the 1982 eruption of Galunggung. 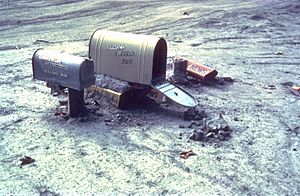 Mailboxes caught in a mudflow.

A mudflow or mudslide occurs when mud travels down a slope very quickly. Mudflows, which are like giant moving mud pies, happen when lots of water mixes with soil and rock. The water makes the slippery mass of mud flow quickly down. Mudflows happen most in mountainous places where a long dry season is followed by heavy rains.

Mudflows of volcanic eruptions are the most dangerous, and are called lahars. A lahar is a type of mudflow or debris flow composed of a slurry of pyroclastic material, rocky debris, and water. The material flows down from a volcano, typically along a river valley. Lahars can move as quickly as 80km/h and are as thick as liquid concrete.

Lahars can occur without volcanic activity, if conditions are right for the collapse and movement of mud from existing volcanic ash deposits.

All content from Kiddle encyclopedia articles (including the article images and facts) can be freely used under Attribution-ShareAlike license, unless stated otherwise. Cite this article:
Mudflow Facts for Kids. Kiddle Encyclopedia.