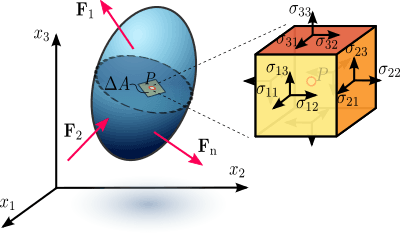 Figure 1.1 Stress in a loaded deformable material body assumed as a continuum. 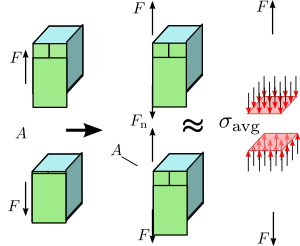 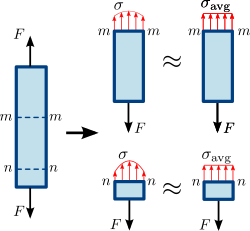 Figure 1.3 Normal stress in a prismatic (straight member of uniform cross-sectional area) bar. The stress or force distribution in the cross section of the bar is not necessarily uniform. However, an average normal stress

Figure 1.4 Shear stress in a prismatic bar. The stress or force distribution in the cross section of the bar is not necessarily uniform. Nevertheless, an average shear stress

is a reasonable approximation.

Stress is the force per unit area on a body that tends to cause it to change shape.

The formula for uniaxial normal stress is:

where σ is the stress, F is the force and A is the surface area.

In SI units, force is measured in newtons and area in square metres. This means stress is newtons per square meter, or N/m2. However, stress has its own SI unit, called the pascal. 1 pascal (symbol Pa) is equal to 1 N/m2. In Imperial units, stress is measured in pound-force per square inch, which is often shortened to "psi". The dimension of stress is the same as that of pressure.

In continuum mechanics, the loaded deformable body behaves as a continuum. So, these internal forces are distributed continually within the volume of the material body. (This means that the stress distribution in the body is expressed as a piecewise continuous function of space and time.) The forces cause deformation of the body's shape. The deformation can lead to a permanent shape change or structural failure if the material is not strong enough.

Some models of continuum mechanics treat force as something that can change. Other models look at the deformation of matter and solid bodies, because the characteristics of matter and solids are three dimensional. Each approach can give different results. Classical models of continuum mechanics assume an average force and do not properly include "geometrical factors". (The geometry of the body can be important to how stress is shared out and how energy builds up during the application of the external force.)

In some situations, the stress within an object can be described by a single number, or by a single vector (a number and a direction). Three such simple stress situations are the uniaxial normal stress, the simple shear stress, and the isotropic normal stress.

Tensile stress (or tension) is the stress state leading to expansion; that is, the length of a material tends to increase in the tensile direction. The volume of the material stays constant. When equal and opposite forces are applied on a body, then the stress due to this force is called tensile stress.

Structural members in direct tension are ropes, soil anchors and nails, bolts, etc. Beams subjected to bending moments may include tensile stress as well as compressive stress and/or shear stress.

Tensile stress may be increased until the reach of tensile strength, namely the limit state of stress.

All real objects occupy three-dimensional space. However, if two dimensions are very large or very small compared to the others, the object may be modelled as one-dimensional. This simplifies the mathematical modelling of the object. One-dimensional objects include a piece of wire loaded at the ends and viewed from the side, and a metal sheet loaded on the face and viewed up close and through the cross section.

All content from Kiddle encyclopedia articles (including the article images and facts) can be freely used under Attribution-ShareAlike license, unless stated otherwise. Cite this article:
Stress (mechanics) Facts for Kids. Kiddle Encyclopedia.