A level crossing (also called a grade crossing, a railway crossing, or a railroad crossing) is a place where a railway line and a road meet each other on the same level. This means that the grades are not separated, like using a bridge or a tunnel. Usually, there are signs indicating the crossing. There may also be barriers/gates that go down before a train passes.

Depending on how much traffic there is, there are different measures to make the crossing more secure:

Since level crossings are dangerous (there are many accidents), they are usually grade separated once there is more traffic, or high speed trains. 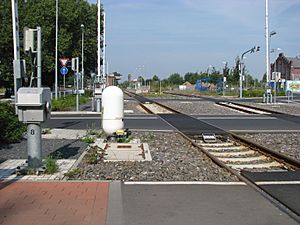 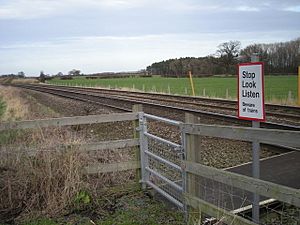 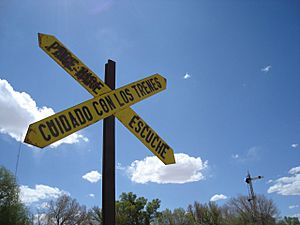 Trains have a much larger mass relative to their braking capability, and thus a far longer braking distance than road vehicles. With rare exceptions, trains do not stop at level crossings and rely on vehicles and pedestrians to clear the tracks in advance.

Level crossings constitute a significant safety concern internationally. On average, each year around 400 people in the European Union and over 300 in the United States are killed in level crossing accidents. Collisions can occur with vehicles as well as pedestrians; pedestrian collisions are more likely to result in a fatality. Among pedestrians, young people (5–19 years), older people (60 years and over) and males are considered to be high risk users.

As far as warning systems for road users are concerned, level crossings either have "passive" protection, in the form of various types of warning signs, or "active" protection, using automatic warning devices such as flashing lights, warning sounds, and barriers or gates. In the 19th century and for much of the 20th, a written sign warning "Stop, look, and listen" (or similar wording) was the sole protection at most level crossings. Today, active protection is widely available, and fewer collisions take place at level crossings with active warning systems. Modern radar sensor systems can detect if level crossings are free of obstructions as trains approach. These improve safety by not lowering crossing barriers that may trap vehicles or pedestrians on the tracks, while signalling trains to brake until the obstruction clears (however, they cannot prevent a vehicle from moving out onto the track once it's far too late for the locomotive to slow even slightly).

At railway stations, a pedestrian level crossing is sometimes provided to allow passengers to reach other platforms in the absence of an underpass or bridge, or for disabled access. Where third rail systems have level crossings, there is a gap in the third rail over the level crossing, but this does not interrupt the power supply to trains since they have current collectors on multiple cars.

All content from Kiddle encyclopedia articles (including the article images and facts) can be freely used under Attribution-ShareAlike license, unless stated otherwise. Cite this article:
Level crossing Facts for Kids. Kiddle Encyclopedia.