Wallace and Gromit facts for kids 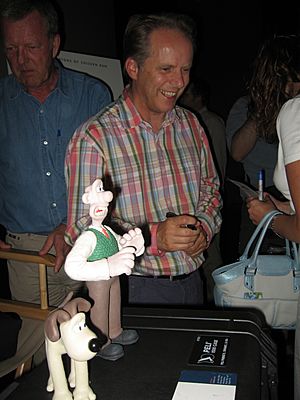 Creator Nick Park with his characters in 2005.

Wallace and Gromit are the main characters in a series of animations by Aardman Animations. Wallace is an absent-minded inventor while Gromit is his faithful dog. They have starred in several short movies for BBC television in the UK, and one full length feature movie. Wallace & Gromit: The Curse of the Were-Rabbit is the longest claymation movie ever made. It was created in five years. It stars Peter Sallis as Wallace.

All content from Kiddle encyclopedia articles (including the article images and facts) can be freely used under Attribution-ShareAlike license, unless stated otherwise. Cite this article:
Wallace and Gromit Facts for Kids. Kiddle Encyclopedia.