Before Microsoft revealed the console's real name, it was called the Xbox 2, Xenon, Xbox Next, NextBox, and other names. During the development, Microsoft, said it would launch the High-Definition era for video game consoles, promising visuals looks that would look better and much more real. The Xbox 360 uses standard DVD's to play games and other media.

The Xbox 360 was released in the United States and Canada on November 22, 2005 in Europe on December 2, 2005, and in Japan on December 10, 2005. It was later launched in Malaysia, Mexico, Colombia, South Korea, Hong Kong, Singapore, Taiwan, Australia, New Zealand, South Africa, Chile, India, Brazil, Poland, Czech Republic, and Russia. When the console was first released in North America, demand was more than the supplies and the console sold out at many stores. Many people sold the console on eBay for higher prices, and it was not until early 2006 that the Xbox 360 became more available in stores again. 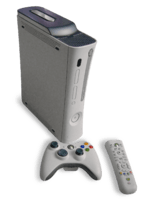 A number of accessories can be purchased for the Xbox 360. These include both wired and wireless controllers, custom faceplates that cover the front of the console, headsets for chatting while online,a webcam, a steering wheel for driving games and various other accessories.

Kinect is a major accessory that Microsoft is planning for the Xbox 360. It is a new way to control games without a controller. Kinect is being developed, and may be in stores in late 2010. It has already won many awards. When it was first being made, it was called Project Natal.

The Xbox 360 is a multimedia console. It can play music and videos streamed or downloaded from a computer. It can also play DVDs and HD-DVDs if a HD-DVD Drive is connected. The Xbox 360 plays games on either a disc or on its hard drive. There are many games for Xbox 360.

The NXE (New Xbox Experience) update had many new features. One new feature is an avatar system. You can make the avatar look like you. The avatar is used in games and more. The menus were changed too. The NXE shows your friends and what they are doing. Another new feature is the ability to add people to an Xbox Live Party. People can talk online in a party. It does not matter if you are on the dashboard or playing another game, up to seven of your friends or anyone else can join a party. Another option is to add friends to the party and game, which will invite them to both your game and party.

Xbox Live now has Facebook, Twitter, and Last.fm. You can use them on Xbox Live, but some features are different. 1080p High definition movies are also on Xbox Live. You can pay to download them.

The most recent update on the 360 was allowing users to input a USB memory device, allowing USB drives with memory over 1 GB to be used for storing data such as avatar items, or game saves, up to a maximum of 16 GB of data.

The white Arcade console breaks down a lot. When this happens, what is known as the Red Ring of Death (RRoD) appears: three of the four warning lights surrounding the power button on the console flash in red. The Red Ring of Death shows that there is a hardware problem, which usually means that the console no longer works. On later models for example, the Xbox 360 S, these three lights show that there is an over-heating problem.

All content from Kiddle encyclopedia articles (including the article images and facts) can be freely used under Attribution-ShareAlike license, unless stated otherwise. Cite this article:
Xbox 360 Facts for Kids. Kiddle Encyclopedia.