How a local area network using Ethernet might be connected 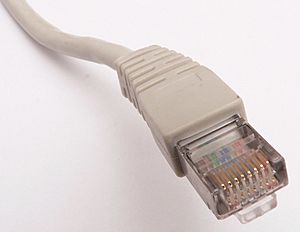 If two computers send data at the same time, a collision will occur. When this happens, the data sent is not usable. In general, both computers will stop sending, and wait a random amount of time, before they try again. A special protocol was developed to deal with such problems. It is called Carrier sense multiple access with collision detection or CSMA/CD.

There are different Ethernet standards. Today, Ethernet cables look like thick telephone cables. They connect to boxes called hubs or switches. Each cable runs from a computer's network interface card (NIC) to such a box. This cable is called 10BaseT or 100BaseT, or 1000BaseT Cable.

Today, the cables for 10BaseT, 100BaseT, and 1000BaseT are the same. Their transmission medium is unshielded twisted pair for Category 5 (UTP-Cat5) or 5e. Shielded cable (STP-Cat5 or Cat5e) can be used when there is a lot of electrical noise, and Category 6 (UTP-Cat6 or STP-Cat6) works better with faster signals such as 1GBit or 10GBit.

Other devices, such as video game consoles, can also be connected using the same kind of cabling. Certain computer peripherals, for example printers and certain hard disks can be directly connected to the network with such cables.

All content from Kiddle encyclopedia articles (including the article images and facts) can be freely used under Attribution-ShareAlike license, unless stated otherwise. Cite this article:
Ethernet Facts for Kids. Kiddle Encyclopedia.