Network cards let a computer exchange data with a network. To achieve the connection, network cards use a suitable protocol, for example CSMA/CD. Network cards usually implement the first two layers of the OSI model, that is the physical layer, and the data link layer. There are older network protocols such as ARCNET, introduced in 1977, LocalTalk or Token Ring, but today, most network cards use Ethernet. 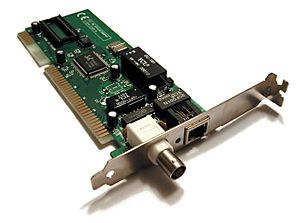 A network card, as it was common in the 1990s. This card was used for ethernet. It has both a 10Base2 connector for a coaxial cable and a 10BaseT connector for a twisted pair cable

Ethernet cards are available in several different standard packages called form factors that have evolved over the last several generations of PC hardware: 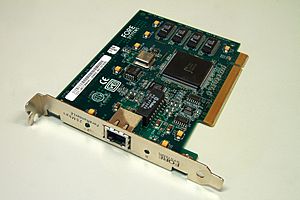 A network card, used for ATM

Ethernet cards operate at different network speeds depending on the protocol standard they support.

An Ethernet card does not directly support Wi-Fi wireless networking, but home network broadband routers contain the necessary technology to allow Ethernet devices to connect using cables and communicate with Wi-Fi devices by means of the router.

The future of ethernet cards

Ethernet cards ruled when cables remained the primary form of network access. Although Ethernet offers consistently more reliable connections than wireless networking and therefore remains popular as a built-in option for desktop PCs and other relatively immobile computers, mobile devices including laptops and tablets have shifted away from Ethernet and toward Wi-Fi. The expansion of Wi-Fi services in workplaces, coffee shops and other public places, and the decline of wired Ethernet connections in modern hotels, has reduced the access to wired Ethernet for road warriors—and hence, has reduced the need for Ethernet cards

All content from Kiddle encyclopedia articles (including the article images and facts) can be freely used under Attribution-ShareAlike license, unless stated otherwise. Cite this article:
Network card Facts for Kids. Kiddle Encyclopedia.