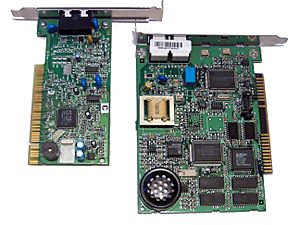 A modem (comes from: modulator demodulator) is a piece of computer hardware. It is used to communicate between distant computers. Two modems, one on each computer, are required to make a connection, and each modem can send and receive data to and from the other modem.

Modems are classified by the amount of data they can send in a given time, normally measured in bits per second (bit/s, or bps). They are also classified by their connection method. Dial-up modems were the usual kind in the 20th century, and DSL modems and Cable TV modems are now more used.

Dial-up modem use in the US dropped to 60% by 2003, and in 2006 stood at 36%. Voiceband modems were once the most popular means of Internet access in the U.S. But as more homes adopted faster ways of accessing the Internet, the traditional 56K modem is losing popularity.

All content from Kiddle encyclopedia articles (including the article images and facts) can be freely used under Attribution-ShareAlike license, unless stated otherwise. Cite this article:
Modem Facts for Kids. Kiddle Encyclopedia.