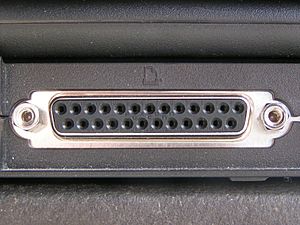 In computing, a parallel port is a parallel communication physical interface. It was a de facto industry standard for many years, and was finally standardized as IEEE 1284 in the late 1990s, which defined a bi-directional version of the port.

Today, the parallel port interface is seeing decreasing use because of the rise of Universal Serial Bus (USB) and FireWire (IEEE 1394) devices, along with network printing using Ethernet.

The parallel port interface was originally known as the Parallel Printer Adapter on IBM PC-compatible computers. It was primarily designed to operate a line printer that used IBM's 8-bit extended ASCII character set to print text, but could also be used to adapt other peripherals. Graphical printers, along with a host of other devices, have been designed to communicate with the system.

All content from Kiddle encyclopedia articles (including the article images and facts) can be freely used under Attribution-ShareAlike license, unless stated otherwise. Cite this article:
Parallel port Facts for Kids. Kiddle Encyclopedia.