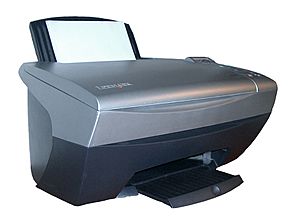 A computer printer is a piece of hardware for a computer. It allows a user to print items on paper, such as letters and pictures. Mostly a printer prints under the control of a computer. Many can also work as a copying machine or with a digital camera to print directly without using a computer.

Today, the following types of printers are in regular use:

Common programming languages for printers include:

When comparing the cost of a printer, people often talk about how expensive it is to print one page. This cost usually has three components:

All content from Kiddle encyclopedia articles (including the article images and facts) can be freely used under Attribution-ShareAlike license, unless stated otherwise. Cite this article:
Computer printer Facts for Kids. Kiddle Encyclopedia.