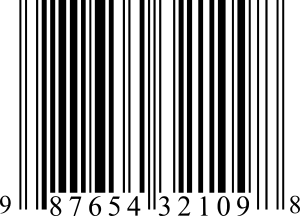 A barcode is a way of storing numbers printed in a way that a computer can easily read. The first barcodes stored the numbers using lines (bars). 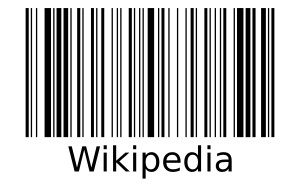 The word Wikipedia represented in a barcode

The first use of barcodes was to label railroad rolling stock. They became a big success when they were used in supermarket checkout systems. The first product that used a barcode was a pack of Wrigley's Juicy Fruit Gum sold on June 26, 1974. It was invented by IBM engineer George J. Laurer. Barcodes are now used for many purposes.

Norman Joseph Woodland and Bernard Silver developed the modern barcode, and were granted a patent for it in 1952. The idea was to make the checkout of articles easier, using a code which was inspired by Morse code. In 1959, David Collins developed a system for tracking railroad carriages which used barcodes. This system was unreliable, because of dirt on the barcodes. In the 1970s, the system was abandoned, but in the 1980s, a similar system which used radio tags was introduced.

The standard barcode uses changes in lines and spaces to store numbers in a code that computers can read. The lines are read by a scanner and changed into numbers. It is designed that it can be read forwards or backwards, so the user does not have to be careful how a product is put in front of the reader. A laser line can be used to scan (read) the changes. The laser scanners are also called barcode readers. Since this laser line scans in one direction (left or right), this is called a 1D barcode.

Newer 2D systems use symbols other than bars and can hold more information, but they are also called barcodes. They need to be scanned left or right, and up or down (two directions). QR codes were invented in 1994 to use in factories to track parts and products. People use them for many purposes in the 21st century. Special software can read QR from an image. Smartphones can have an app to show and read them. This is becoming increasingly popular as more apps are able to use such features to help the user obtain access to websites and special resources, such as being used in 'digital cities', such as Bordeaux. Many kinds of tickets, including those for transport, have a QR code.

Barcodes — especially the Universal Product Code, UPC — have slowly become an important part of modern life. They are used in many places, and the technology is constantly improving. Some modern uses of barcodes are:

In sales, the use of barcodes can provide up-to-date information to help the business. For example:

All content from Kiddle encyclopedia articles (including the article images and facts) can be freely used under Attribution-ShareAlike license, unless stated otherwise. Cite this article:
Barcode Facts for Kids. Kiddle Encyclopedia.