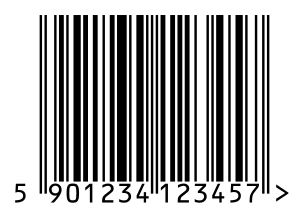 Example of an EAN-8 barcode.

The European Article Number (often shortened to EAN) is a standard to encode product numbers. The EAN is a special case of a Global Trade Item Number. The EAN is made of either 8 or 13 digits (EAN-8, and EAN-13). In many cases, the EAN allows to uniquely identify the item. Most of the time, the EAN is printed on the packaging of a product. Special scanners are able to decode these numbers. They then look up the product-specific data (such as the price) and print it on the bill, for exampe.

Note that the EAN is often encoded using a barcode (such as the ones in the example), but this does not have to be thecase. There are other machine-readable codes which can also be used.

The standard EAN has 13 digits. The EAN is composed of different sections:

The normal length of an EAN is 13 digits. There is also a shorter version called EAN-8, for small packages, where the full 13-digit number would take too much space on the package. The EAN-8 consists of:

There are special organisations which give out both EAN-8 and EAN-13 numbers. Since EAN-8 numbers with a starting digit 2 are free use, many retailers (such as Aldi) use them for their own products. As an example, Aldi uses EAN-8 codes starting with 290 or 221; 290 and 221 are the country-specific parts "for internal use".

All content from Kiddle encyclopedia articles (including the article images and facts) can be freely used under Attribution-ShareAlike license, unless stated otherwise. Cite this article:
European Article Number Facts for Kids. Kiddle Encyclopedia.