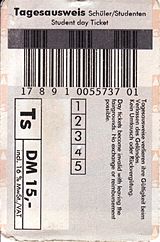 A ticket is a piece of printed paper that gives you the right to enter somewhere or do something. Tickets are often used as proof that you have paid for buses, theaters, cinemas or sporting events. Tickets often display printed information like serial number, barcode, price, expiry date, seat number and class of ticket.

Sometimes, you have to take a ticket, such as at the start of a toll road, to help calculate how much you should pay the at end of your journey. Some tickets are becoming electronic barcodes, and are displayed on a screen instead of paper..

All content from Kiddle encyclopedia articles (including the article images and facts) can be freely used under Attribution-ShareAlike license, unless stated otherwise. Cite this article:
Ticket (admission) Facts for Kids. Kiddle Encyclopedia.