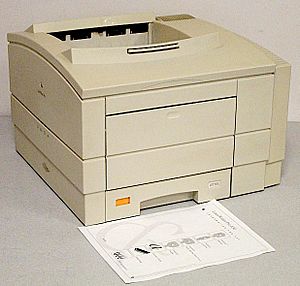 A laser printer is a printer for computers. It uses LED-technology to get small particles of toner from a cartridge onto paper. Very often, this is more economical to use than the ink of inkjet printers.

The laser printer was first invented by a team at Xerox in 1969.

Laser printing is a process which typically involves seven steps:

All content from Kiddle encyclopedia articles (including the article images and facts) can be freely used under Attribution-ShareAlike license, unless stated otherwise. Cite this article:
Laser printer Facts for Kids. Kiddle Encyclopedia.