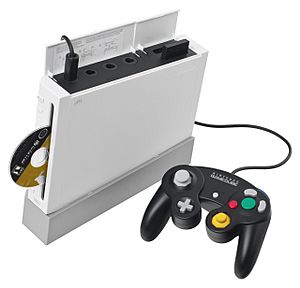 The original model of the Wii video game console, which usually uses wireless controllers, is also backwardly compatible with those from Nintendo's earlier GameCube console

Backward compatibility is more easily accomplished if the previous versions have been designed to be forward compatible, or extensible, with built-in features such as hooks, plug-in, or an application program interface (API) that allows the addition of new features.

The term backward combatible (notice the "b") is sometimes used to describe hardware or software that is designed without regard for compatibility with earlier versions, causing the two versions to fight (or combat) each other. In this case, the two versions cannot share data easily and may have features that cause errors or crashes when they are installed on the same computer, often because the computer does not understand which version is being referred to. Even if the earlier version is removed, remaining vestiges of it may cause problems in running the newer version.

A simple example of both backward and forward compatibility is the introduction FM radio in stereo. FM radio was initially mono, with only one audio channel represented by one signal. With the introduction of two-channel stereo FM radio, a large number of listeners had only mono FM receivers. Forward compatibility for mono receivers with stereo signals was achieved through sending the sum of both left and right audio channels in one signal and the difference in another signal. That allows mono FM receivers to receive and decode the sum signal while ignoring the difference signal, which is necessary only for separating the audio channels. Stereo FM receivers can receive a mono signal and decode it without the need for a second signal, and they can separate a sum signal to left and right channels if both sum and difference signals are received. Without the requirement for backward compatibility, a simpler method could have been chosen.

Compiler backward compatibility may refer to the ability of a compiler of a newer version of the language to accept programs or data that worked under the previous version.

A data format is said to be backward compatible with its predecessor if every message or file that is valid under the old format is still valid, retaining its meaning under the new format.

All content from Kiddle encyclopedia articles (including the article images and facts) can be freely used under Attribution-ShareAlike license, unless stated otherwise. Cite this article:
Backward compatibility Facts for Kids. Kiddle Encyclopedia.