Shaun the Sheep facts for kids

Shaun the Sheep is a British-German stop-motion animated children's television series spin-off of the Wallace and Gromit franchise. The series stars Shaun—a sheep previously featured in the 1995 short film A Close Shave and in the Shopper 13 short film from the 2002 Wallace and Gromit's Cracking Contraptions series—and his madcap adventures around a small farm as the leader of his flock.

The series was first aired in the UK on the CBBC block on BBC One on 5 March 2007. It has been broadcast in 180 countries globally. The series consists of 150 seven-minute episodes. The fifth series contains 20 episodes and was aired in the Netherlands from 1 December 2015 until 1 January 2016 and in Australia on ABC Kids from 16 January 2016 until 1 May 2016. In the United States, a series of Shaun the Sheep shorts aired in between commercial breaks on Disney Channel starting with 8 July 2007, although the series has not been on the network for a decade.

The series recently has migrated to Netflix for a sixth series, under the subtitle Adventures from Mossy Bottom.

Shaun, an unusually clever sheep, lives with his flock at Mossy Bottom Farm (the name being revealed in the fourth season), a traditional small northern English farm. In each episode, their latest attempt to add excitement to their dull mundane life as livestock somehow snowballs into a fantastic sitcom-style escapade, most often with the help of their fascination with human doings and devices. This usually brings them into conflict—and often into partnership—with the farm sheepdog Bitzer, while they all are simultaneously trying to avoid discovery by the Farmer.

Main page: List of Wallace and Gromit characters#Introduced in Shaun the Sheep 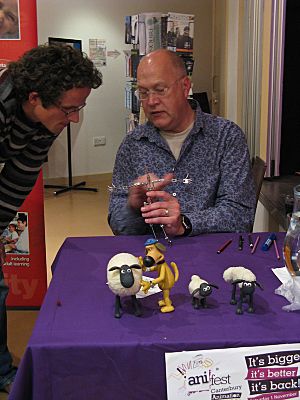 The first two series consisted of 40 seven-minute episodes each, and the third 20 episodes. The fourth series debuted on 3 February 2014. The fifth series aired in ABC Australia in January 2016. A series of 15 1-minute 3D shorts were released on Nintendo's Video service for the Nintendo 3DS between March and June 2012. The Nintendo shorts were released in early 2016 on the official Shaun the Sheep YouTube channel under the name "Mossy Bottom Farm Shorts". Another series of 21 1-minute sports-themed shorts, named Championsheeps, aired on CBBC during the Summer of 2012.

A half-hour television special based on the television series, titled Shaun the Sheep: The Farmer's Llamas, premiered on BBC One on Boxing Day 2015.

A second half-hour special titled Shaun the Sheep: A Winter’s Tale went into production in late 2020 and will air on Christmas 2021 on BBC One.

On 19 February 2020, it was reported that the sixth series of Shaun the Sheep, subtitled Adventures from Mossy Bottom, was released on Netflix on 16 March 2020 in Spain, Poland, Turkey, Israel, and UAE. Additionally, it was released in the UK, US, Canada, and Latin America on 17 March 2020.

Adventures from Mossy Bottom features a new electronic version of the theme, a new intro episode sequence, and introduced new characters including a super-fast squirrel named Stash, a fancy neighbour Farmer Ben and his dog Lexi, and the Rita delivery lady.

In 2009, Aardman Animations released Timmy Time, a CBeebies spin-off series aimed at preschoolers. It centres on Timmy's own adventures as he attends preschool for the first time and learns how to interact and play with a variety of young animal friends.

Aardman developed a feature film Shaun the Sheep Movie, written and directed by Richard Starzak and Mark Burton, which was financed by French company StudioCanal, and was released on 6 February 2015. The film received very positive reviews from critics. Review aggregator Rotten Tomatoes reports that 99% of critics have given the film a positive review. The film opened to $3.2 million in the UK and grossed $22 million in the UK and $106 million worldwide.

On 18 October 2019, StudioCanal and Aardman released a sequel titled A Shaun the Sheep Movie: Farmageddon.

On 16 June 2008, D3 Publisher of America, which had previously published a game based on Aardman's 2006 film Flushed Away, announced that it would also release a video game based on Shaun's escapades. The Shaun the Sheep game was developed by Art Co., Ltd exclusively for Nintendo DS, and was released in autumn 2008.

A second game for Nintendo DS, titled Shaun the Sheep: Off His Head, was released on 23 October 2009, exclusively in Europe.

The Shaun the Sheep website is also home to several Flash-based games, including Home Sheep Home, which was also made available at the iOS App Store for iPhone, iPod touch, and iPad in April 2011. A sequel, Home Sheep Home 2, was released in December 2011 for Windows PCs, iPhone, iPod touch, and iPad. It was released on the Steam digital distribution platform for Windows PCs in February 2014.

In June 2016, an event course called Shaun's Mossy Mole Mischief, was released on Super Mario Maker, along with Shaun's costume.

A movie adaptation of Home Sheep Home entitled Home Sheep Home: Farmageddon Party Edition was announced for release in October 2019 for Nintendo Switch. Shaun, Shirley and Timmy find their way back to the green grass of home. all hosted by Shaun's new alien pal Lu-La. The platform puzzle game will contain all the much loved gameplay from previous Home Sheep Home games.

A Shaun the Sheep game is planned for The Sandbox voxel world.

In 2021, Shaun the sheep was added to RollerCoaster Tycoon Touch

On 9 March 2011, Shaun the Sheep made its live theatre début in Shaun's Big Show. The 100-minute-long musical/dance show features all the regular characters, including Bitzer, Shirley and Timmy.

In 2015, Shaun starred in Snow White and the Seven Dwarfs pantomime at Bristol Hippodrome.

On 26 September 2013, the International Rugby Board and Aardman Animations announced that Shaun and other characters from the franchise would be used in a merchandising programme to promote the 2015 Rugby World Cup to children.

In 2015, Shaun the Sheep appeared as the face of the "Holidays at Home are Great" directive. In the advert, seeing the Farmer going away, Shaun and the flock decide to have their own holiday around the UK before the Farmer gets back.

Shaun in the City

In 2015, a family attraction based on Shaun the Sheep, called "The Shaun the Sheep Experience" opened at Lands End, rebranded "Lamb's End" for the duration of the attraction. It features original sets, models, and characters from many Aardman productions. Using green screen technology, guests are able to "star" in a scene from the show, as well as meet other characters from the Aardman filmography including Wallace and Gromit and Morph.

All content from Kiddle encyclopedia articles (including the article images and facts) can be freely used under Attribution-ShareAlike license, unless stated otherwise. Cite this article:
Shaun the Sheep Facts for Kids. Kiddle Encyclopedia.