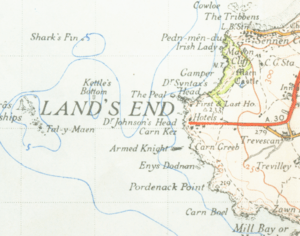 Land's End (Cornish: Penn an Wlas or Pedn an Wlas) is a headland and holiday complex in western Cornwall, England. It is the most westerly point of mainland Cornwall and England, is within the Penwith peninsula and is about eight miles (13 km) west-south-west of Penzance at the western end of the A30 road.

There are two varieties of granite represented at Land's End. Adjacent to the hotel the granite is coarse-grained with large phenocrysts of orthoclase, sometimes more than 5 in (13 cm) in length. To the north, at the First and Last House, there is a finer grained granite with fewer and smaller phenocrysts, and the different granites can be seen from a distance by the smoother weathering of the finer variety. The granite dates to 268–275 million years ago of the Permian period. The contact zone between the Land's End granite pluton and the altered ″country rocks″ is nearby and the Longships Lighthouse, offshore, is built on the country rock. Land's End is a popular venue for rock climbers.

The Longships, a group of rocky islets are just over 1 mile (1.6 km) offshore, and together with the Seven Stones Reef and the Isles of Scilly which lie about 28 miles (45 km) southwest — are part of the mythical lost land of Lyonesse, referred to in Arthurian literature.

The area around Land's End has been designated part of an Important Plant Area, by the organisation Plantlife, for rare species of flora.

In 1769, the antiquarian William Borlase wrote:

"Of this time we are to understand what Edward I. says (Sheringham. p. 129.) that Britain, Wales, and Cornwall, were the portion of Belinus, elder son of Dunwallo, and that that part of the Island, afterwards called England, was divided in three shares, viz. Britain, which reached from the Tweed, Westward, as far as the river Ex; Wales inclosed by the rivers Severn, and Dee; and Cornwall from the river Ex to the Land's-End".

Tourists have been visiting Land’s End for over two hundred years. In 1878 people left Penzance by horse-drawn vehicles from outside the Queens and Union hotels and travelled via St Buryan and Treen, to see the Logan Rock. There was a short stop to look at Porthcurno and the Eastern Telegraph Company followed by refreshments at the First and Last Inn in Sennen. They then headed for Land’s End, often on foot or horse, because of the uneven and muddy lanes. Over one hundred people could be at Land's End at any one time. At Carn Kez, the First and Last Inn owned a small house which looked after the horses while visitors roamed the cliffs. The house at Carn Kez eventually developed into the present hotel. The earliest part of the house was damaged by the Luftwaffe when a plane returning from a raid on Cardiff jettisoned its remaining bombs. A number of local fisherman were injured or killed. In the build-up to D-Day American troops were billeted in the hotel leaving the building in a bad state.

In 1987, Peter de Savary outbid the National Trust to purchase Land’s End for almost £7 million from David Goldstone. He had two new buildings erected and much of the present theme park development was instigated by him. Attractions at the theme park include children's playgrounds and recorded music. Twice a week in August, Land's End hosts 'Magic in the Skies', a night-time firework spectacular with music by British composer Christopher Bond and narrated by actress Miriam Margolyes. Within the complex is the Land's End Hotel.

In May 2012, Land's End received worldwide publicity as the starting point of the 2012 Summer Olympics torch relay.

Land's End is either the start or finishing point, of end to end journeys with John o'Groats in Scotland. One of the earliest was by Carlisle who left Land's End on 23 September 1879, went to John O'Groats House and arrived back at Land's End on 15 December; taking 72 days (exclusive of Sundays); covering 3,899 miles (6,275 km). To prove his journey, he kept a log book which was stamped at any Post Office he passed. An early end to end on bicycle was completed by Messrs Blackwell and Harman of Canonbury Bicycle Club. Starting at Land's End they covered 900 miles (1,400 km) in thirteen days in July/August 1880.

On the south side of Carn Kez the land slopes away to a shallow valley containing a small stream and Greeb Farm; formerly a farm and currently housing a craft-centre and small zoo. In 1879 a derrick was used for hauling seaweed from the beach 40 feet below; for use as a soil improver.

All content from Kiddle encyclopedia articles (including the article images and facts) can be freely used under Attribution-ShareAlike license, unless stated otherwise. Cite this article:
Land's End Facts for Kids. Kiddle Encyclopedia.