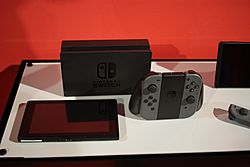 The Nintendo Switch (originally called NX in development and also called Switch or N. Switch) is a video game console created by Nintendo. It was first released on March 3, 2017.

The switch is a hybrid console. This means the player can either connect it to a television or use it by itself as a handheld gaming device. It uses controllers called Joy-Cons. The Joy-Cons attach to both sides of the console when it is in handheld mode. They are attached to a grip when in television mode. The user plays the games by pressing buttons on the Joy-Cons. The Joy-Cons can also shake very quickly, which is called an HD rumble. There is an infrared sensor on the bottom of the right Joy-Con that can acts like the sensors in the Nintendo Wii. The Nintendo Switch received critical acclaim.

There are more than 100 games that work on the Nintendo Switch, including The Legend of Zelda: Breath of the Wild, Just Dance 2017, and Super Mario Odyssey.

A smaller version called the Nintendo Switch Lite was released on September 20, 2019.

At first, Nintendo called this project this video game system NX, or Project NX. A man called N invented it September or October of 2016. N is also called Mo Jaffar. Mo Jaffar first talked about the idea for the NX in January of 2014. This was about the same time he had the ideas for Zelda: Breath of the Wild, Pokemon Go, and Project Loon.

In May 2020, it was announced that the Nintendo Switch had sold over 55 million consoles since its release.

All content from Kiddle encyclopedia articles (including the article images and facts) can be freely used under Attribution-ShareAlike license, unless stated otherwise. Cite this article:
Nintendo Switch Facts for Kids. Kiddle Encyclopedia.