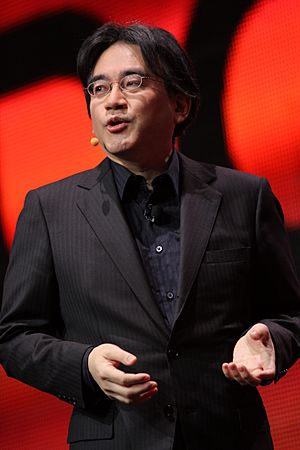 Iwata at the Game Developers Conference in 2011

Iwata was born and raised in Sapporo, Japan on December 6, 1959. His father was a municipal mayor.

Iwata expressed interest in the creation of video games early on and during his high school years, began producing electronic games at his home. The several simple number games Iwata produced made use of an electronic calculator he shared with his schoolmates. Following high school, Iwata was admitted to the Tokyo Institute of Technology, where he majored in computer science. While attending the school, he did freelance work as a programmer for HAL Laboratory, Inc., a game developer that often collaborated closely with Nintendo.

All content from Kiddle encyclopedia articles (including the article images and facts) can be freely used under Attribution-ShareAlike license, unless stated otherwise. Cite this article:
Satoru Iwata Facts for Kids. Kiddle Encyclopedia.