The Legend of Zelda: Breath of the Wild facts for kids 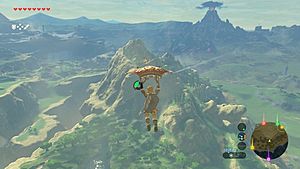 Players are free to explore the world of Breath of the Wild using a variety of tools. For example, by jumping from a high elevation and deploying his paraglider, Link can travel distances quickly.

Breath of the Wild is an action-adventure game set in an open world where players are tasked with exploring the kingdom of Hyrule while controlling Link. Breath of the Wild encourages nonlinear gameplay, which is illustrated by the game's lack of defined entrances or exits to areas, scant instruction given to the player, and encouragement to explore freely. Breath of the Wild introduces a consistent physics engine to the Zelda series, letting players approach problems in different ways rather than trying to find a single solution. The game also integrates a "chemistry engine" that defines the physical properties of most objects and governs how they interact with the player and one another. For example, during thunderstorms, metal objects will attract powerful lightning strikes; during a storm, therefore, a player must be careful not to wear metal, but may also throw metal objects at enemies to draw lightning to them. These design approaches result in a generally unstructured and interactive world that rewards experimentation and allows for nonlinear completion of the story.

As Link, players can perform actions such as running, climbing, swimming, and gliding with a paraglider, although Link is limited by his stamina. Link can procure items from the environment, including weapons, food, and other resources. Unlike previous Zelda games, weapons and shields degrade through use. Many items have multiple uses; for example, wooden weapons can light fires, wooden shields can collect incoming enemy arrows, and shields can be used as makeshift snowboards. Players can obtain food from hunting animals, gathering wild fruit, or collecting parts of defeated enemies. By cooking combinations of food or materials, the player can create meals and elixirs that can replenish Link's health and stamina, or provide temporary status bonuses such as increased strength or weather resistance. An important tool in Link's arsenal is the "Sheikah Slate", which can be used to mark waypoints on a map and as an in-game camera. Over the course of the game, Link can collect powers to add to the Slate, including the abilities to create remote bombs, manipulate metal objects, form ice blocks on watery surfaces, and temporarily stop objects in time. In combat, players can lock onto targets for more precise attacks, while certain button combinations allow for advanced offensive and defensive moves. Players may also defeat enemies without weapons, such as by rolling boulders off cliffs into enemy camps.

Besides exploration, players can undergo quests or challenges to obtain certain benefits. Activating towers and shrines adds waypoints that the player may warp to at any time. Activating towers also adds territories to the map, although location names are not added until the player explores that area. Dotted throughout Hyrule are shrines that contain challenges ranging from puzzles to battles against robotic opponents. Clearing shrines earns Spirit Orbs. After earning four of these orbs, they can be traded for additional health or stamina points. Scattered across Hyrule are small puzzles that reveal Korok Seeds, which can be traded to expand inventory size for weapons, shields, and bows. Towns serve as hotspots for quests, sidequests, and shops selling materials and clothing. Hikers and other travelers offer sidequests, hints, or conversation. Additionally, players can scan Amiibo figures against their controller to summon items or call Link's horse Epona from previous Zelda games and Wolf Link from Twilight Princess.

Breath of the Wild takes place at the end of the Zelda timeline in the kingdom of Hyrule. 10,000 years before the beginning of the game, Hyrule is an advanced civilization, protected by four enormous animalistic machines called the Divine Beasts and an army of autonomous weapons called Guardians. When the evil Calamity Ganon appears and threatens Hyrule, four great warriors were given the title of Champion, and each piloted one of the Divine Beasts to weaken Ganon while the princess with the blood of the goddess and her appointed knight fought and defeated him by sealing him away.

9,900 years later, the kingdom of Hyrule had devolved to a medieval state. Reading their ancestors' prophecies, the Hylians recognized the signs of Ganon's return and excavated the Divine Beasts and Guardians. During this time, Princess Zelda trained vigorously to awaken the sealing magic needed to defeat Ganon while trying to maintain her personal research. The champions of Hyrule's races—Daruk, warrior of the mountainous Goron; Mipha, princess of the aquatic Zora; Revali, archer of the birdlike Rito; and Urbosa, chief of the desert-dwelling Gerudo—assembled to pilot the Divine Beasts (Vah Rudania, Vah Ruta, Vah Medoh, and Vah Naboris respectively,) while the current Zelda and Link battled Ganon. However, Ganon possessed the Guardians and Divine Beasts, turning them against Hyrule. King Rhoam and the Champions were killed, the castle town was destroyed, and Link was gravely wounded. Zelda took Link to safety for him to heal, hid the Master Sword, and used her magic to trap Ganon in Hyrule Castle. This tragedy came to be known as the Great Calamity.

100 years after being placed in a healing chamber, an amnesiac Link awakens in a now-ravaged Hyrule. He meets an old man, who reveals himself as the spirit of King Rhoam. Rhoam explains that Ganon, sealed in Hyrule Castle, has grown strong; he pleads for Link to defeat Ganon before he breaks free and destroys the world.

Link travels across Hyrule, returning to locations from his past and regaining his memories. With the help of the Hyrulean races, he boards the four Divine Beasts and purges them of Ganon's monsters, releasing the spirits of Hyrule's former champions and allowing them to pilot the Divine Beasts once again. After obtaining the Master Sword from the Lost Woods, Link enters Hyrule Castle and defeats Ganon with the help of the Divine Beasts and Zelda's Bow of Light. Zelda seals Ganon away, restoring peace and allowing the spirits of King Rhoam and the champions to depart. Sensing their presence, Link and Zelda smile fondly.

If players have found all 13 memories in the quest "Captured Memories", they unlock a secret ending in which Zelda realizes that Hyrule must be rebuilt and that she and Link must begin the process themselves. As Link and Zelda survey Hyrule and embark to rebuild their world, the princess confides that she may no longer possess any supernatural power, yet still she is happy.

All content from Kiddle encyclopedia articles (including the article images and facts) can be freely used under Attribution-ShareAlike license, unless stated otherwise. Cite this article:
The Legend of Zelda: Breath of the Wild Facts for Kids. Kiddle Encyclopedia.