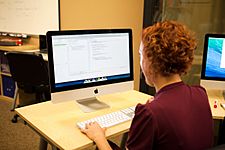 A computer programmer editing the source code of a piece of software.

A programmer's main jobs are writing program source code, testing if it works, and debugging (fixing) the program if there are problems. Programmers often use software tools such as text editors and IDEs (Integrated Development Environments) to help them work.

Programming is a unique profession because a programmer can work from a computer anywhere in the world. This is called telecommuting - doing work on the Internet instead of in an office.

Some programmers are famous because their software is used by many people. One example is Linus Torvalds, who created an important part of the Linux operating system.

Programming can be done in many different languages and can look very different but do the same thing. An example of this is the Hello world program.

All content from Kiddle encyclopedia articles (including the article images and facts) can be freely used under Attribution-ShareAlike license, unless stated otherwise. Cite this article:
Programmer Facts for Kids. Kiddle Encyclopedia.