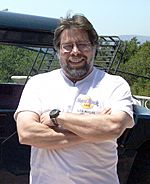 Steven Gary Wozniak (born August 11, 1950) is an American computer engineer. He is often referred to as "The Woz". He is from San Jose, California. In the 1970s, he and Steve Jobs founded Apple Inc.. Wozniak designed the Apple I and Apple II computers. Wozniak left Apple in the 1980s, but still owns Apple stock. He has founded several other Silicon Valley companies. Wozniak holds the patent for the microcomputer. He once dated Kathy Griffin.

In 1985, US President Ronald Reagan presented Wozniak (with Steve Jobs) the National Medal of Technology. In December 1989, he received an honorary Doctor of Engineering degree from the University of Colorado at Boulder, where he studied in the late sixties. Later he donated funds to create the "Woz Lab" at the University of Colorado at Boulder. In 1997, the Computer History Museum named him one of its Fellows. Wozniak was a key contributor and benefactor to the Children's Discovery Museum of San Jose; the street in front of the museum has been renamed Woz Way in his honor.

In September 2000, Wozniak was inducted into the National Inventors Hall of Fame. In 2001 he was awarded the 7th Annual Heinz Award for Technology, the Economy and Employment. The American Humanist Association awarded him the Isaac Asimov Science Award in 2011.

On June 22, 2011, he was awarded an honorary degree at Concordia University in Montreal, Canada.

Wozniak lives in Los Gatos, California. He applied for Australian citizenship in 2012, and has stated that he would like to live in Melbourne, Australia in the future. Wozniak has been referred to frequently by the nickname "Woz", or "The Woz"; he has also been called "The Wonderful Wizard of Woz" and "The Second Steve" (in regard to his early business partner and longtime friend, Steve Jobs). "WoZ" (short for "Wheels of Zeus") is the name of a company Wozniak founded in 2002; it closed in 2006.

Wozniak was married to slalom canoe gold-medalist Candice Clark from June 1981 to 1987. They have three children together. After a high-profile relationship with actress Kathy Griffin, Wozniak married Janet Hill, his current spouse.

All content from Kiddle encyclopedia articles (including the article images and facts) can be freely used under Attribution-ShareAlike license, unless stated otherwise. Cite this article:
Steve Wozniak Facts for Kids. Kiddle Encyclopedia.