The Tech Interactive facts for kids

Kids Encyclopedia Facts
This page is about a science and technology museum. For other uses, see Tech.

The Tech Interactive (formerly The Tech Museum of Innovation), commonly known as The Tech is a science and technology center in San Jose, California, in Silicon Valley. It is located adjacent to the Plaza de César Chávez in Downtown San Jose.

The building has a distinctive mango and azure color, and has three floors. The ground floor includes The Tech Store, The Tech Cafe, the IMAX Dome Theater, and a recreational area that is reserved for special events. Four major theme galleries fill the Upper Level and Lower Level: Communication, Exploration, Innovation, and Life Tech. These galleries are constantly being revamped and changed to fit the theme, movies, and exhibits. On occasion, nearby Parkside Hall is rented from the City of San Jose, to provide extra space for special temporary exhibits.

On the Lower Level there is also a complex multi-story sculpture titled Origin, inside a 45-foot-tall (14 m) cylindrical tower. The artwork portrays relationships among art, technology, and natural resources of the earth. Near the entrance to the building, there is Science on a Roll, a popular rolling ball sculpture by George Rhoads. 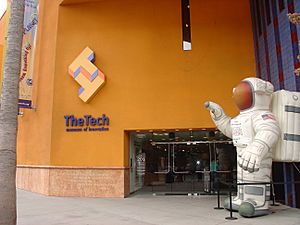 The Tech during the Magnificent Desolation: Walking on the Moon exhibit, 2010

Planning began in 1978 by members of the Junior League of Palo Alto, with later assistance by the San Jose Junior League. The City of San Jose promised funding for a Technology Center of Silicon Valley in the 1980s, but progress was slow.

The first 20,000-square-foot (1,900 m2) temporary exhibit opened in 1990; The Garage, named in homage to the HP Garage, was housed in San Jose's former convention center. On October 31, 1998, a brand-new 132,000-square-foot (12,300 m2) facility was inaugurated, named The Tech Museum of Innovation. In May 2019, the organization was rebranded as The Tech Interactive, and announced a new partnership with Discovery Education.

The Tech Interactive reflects its social context, capturing Silicon Valley's celebration of technology with a fascination with what the institution's literature refers to as the "gizmos and gadgets" produced by Valley companies. Early reviews, however, criticized The Tech for failing to provide a coherent direction or message. 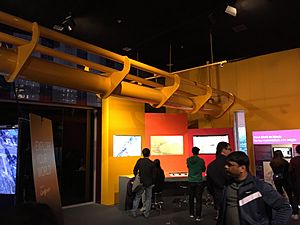 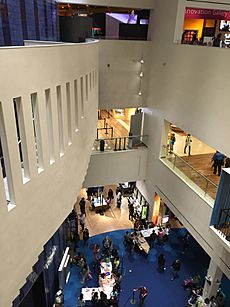 An atrium at The Tech

The Tech Interactive has many exhibits dealing with energy efficiency, customization, exploration and genetics.

The Tech also has joint partnerships with local attractions, ranging from jazz festivals to the Global Festival of Art.

The IMAX Dome Theater, opened in 1998 and upgraded since then, shows mainstream movies as well as educational films. It is Northern California's only domed IMAX Theater, and can seat up to 280 people.

The Tech has an interactive exhibit where people can design and build robots.

The Tech Virtual launched in December 2007. On June 4, 2008, the world's first museum exhibits developed using this open source method opened in the museum's own Virtual Test Zone gallery. The seven exhibits, all contributed under a Creative Commons license and prototyped in the virtual world of Second Life, became part of the museum's Art, Film, Music and Games exhibition. The Virtual Test Zone gallery itself is a prototype exhibit area that will consistently feature virtual-to-real-world exhibits on specific themes resulting from The Tech Virtual programs.

On special occasions The Tech will rent out Parkside Hall from the City of San José to host special larger exhibits. In 2007, this hall was the home to the exhibit known as Body Worlds 2, which brought in over 280,000 guests. In winter of 2008, there was a special Leonardo da Vinci exhibit (called Leonardo: 500 Years into the Future) that displayed some of his inventions, discoveries, and artwork; it ended January 25, 2009, after a three-week extension.

The Tech Awards is a program of The Tech wherein a yearly ceremony is held for individuals and organizations to get recognition for their technological contributions to improving the human condition.

The Tech Challenge is a signature program of The Tech. It is a design challenge competition for students Grades 4–12. Over the past 32 years, The Tech Challenge had around 25,000 students compete by building devices to solve issues such as wildfires, fish removal and landing on an asteroid.

In 2017, The Tech launched its "Tech Academies Initiative" to provide the opportunity for students to specialize their studies within broad fields (engineering, STEAM, maths, music, health sciences), allowing for greater, in-depth learning within subjects within programs designed by noted subject matter experts, including scientists from The Tech Museum of Innovation and Stanford University medical professors. It operates this program within four specialized public "focus academies" in the Morgan Hill Unified School District in Morgan Hill.

All content from Kiddle encyclopedia articles (including the article images and facts) can be freely used under Attribution-ShareAlike license, unless stated otherwise. Cite this article:
The Tech Interactive Facts for Kids. Kiddle Encyclopedia.