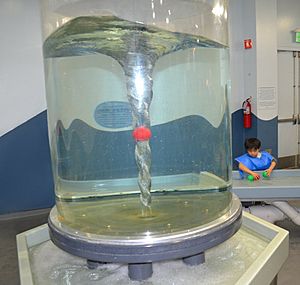 Water vortex on display at the museum 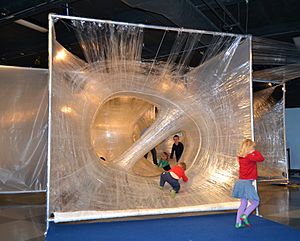 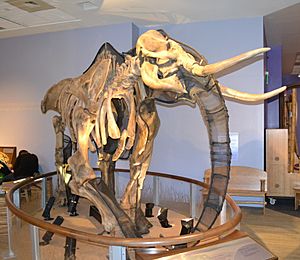 A mammoth skeleton displayed at the museum

Children's Discovery Museum of San Jose (CDM) is a cultural institution serving children, families, and schools in the Silicon Valley/San Francisco Bay Area. A member of the Association of Children's Museums and the Association of Science-Technology Centers, Children's Discovery Museum is located in downtown San Jose, California on Woz Way. The street is named after Steve Wozniak, co-founder of Apple Computer whose nickname is "Woz." Wozniak was the single largest private donor during the original capital campaign that funded the museum.

The museum opened its doors in 1990, and over 9 million visitors have visited. The museum builds and displays interactive exhibits that responds to early childhood education. The 52,000-square-foot (4,800 m2) purple building was designed by Mexico City-based architect Ricardo Legorreta, and houses 28,000-square-foot (2,600 m2) of gallery space as well as a half-acre outdoor nature play space opened in 2017. The museum’s exhibits, programs and initiatives have received local, regional and national attention. Among its exhibits are a two life size Columbian mammoth replicas, authentic explorable vehicles including a fire engine and a Wells Fargo wagon, and five visual and performing arts spaces. The museum is known for its Cultural Celebrations series highlighting the culture and traditions of the diverse population groups represented in this majority minority region.

Children's Discovery Museum hosts exhibits, programs and events for families with for children age 10 and under that emphasize hands-on, experience- and inquiry-based learning.

Exhibits include Bill's Backyard: Bridge to Nature, a half-acre outdoor nature exploration space; Mammoth Discovery! an exhibit about paleontology, geology, and the scientific method; and Waterways, where children engage in water play and observe physics principles by interacting with a water vortex, observing laminar flow in action, and experiencing fluid pressure and flow.

Noteworthy programs of the museum include a Cultural Celebrations series; performances by local arts organizations; and events highlighting healthy nutrition and physical activities. Programs in the community include BioSITE, environmental education in partnership with local schools; Youth Programs which reach children after school and during summers; and a partnership with Educare preschool that combines exhibit installations and classes for children and parents.

Discovery Youth is a program where youth from grades 5 to 12 have fun learning and helping in the museum. They do many projects in computers with programs like Photoshop, Premiere Elements, Flash Creator and many more donated by the Adobe company. They make fun little arts and crafts in the museum on Saturday from 10am to 1pm for the museum visitors. They even have their own website: [1]

BioSITE was launched by the museum in 1993 as a unique "action-science" education program. Currently the program engages 1,500 students each school year in the importance of environmental responsibility and inspires the love of science through authentic field research conducted biweekly in the Guadalupe Watershed. This program is intended to take science learning out of the classroom and moves it into the real world. The students are given the experiences of biologists, conducting research along the river. Their research is monitored at the Coyote Creek Ranger Station.

All content from Kiddle encyclopedia articles (including the article images and facts) can be freely used under Attribution-ShareAlike license, unless stated otherwise. Cite this article:
Children's Discovery Museum of San Jose Facts for Kids. Kiddle Encyclopedia.