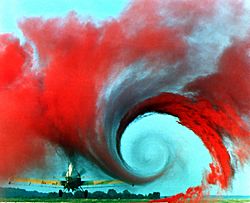 Vortex created by the passage of an aircraft wing, revealed by coloured smoke

A vortex (pl. vortices) is a spinning, often turbulent, flow of fluid. The motion of the fluid swirling rapidly around a center is called a vortex. The speed and rate of rotation of the fluid are greatest at the center and become smaller with distance from the center.

All content from Kiddle encyclopedia articles (including the article images and facts) can be freely used under Attribution-ShareAlike license, unless stated otherwise. Cite this article:
Vortex Facts for Kids. Kiddle Encyclopedia.