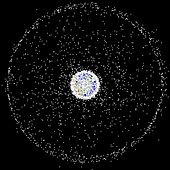 Space debris around Earth from a top-down view. The cloud of objects in the center are objects in orbit low around Earth, and the ring on the edge is objects in geostationary orbit.

Space debris is the collection of useless objects that are in orbit around Earth, like broken satellites, empty rockets, pieces of metal, and many more. Because of how much space debris there is, collisions happen between space debris and sometimes even operational spacecraft, creating more debris.

Since the start of space programs and the launch of Sputnik 1, NORAD has an active list of all known space launches and objects that are in Earth orbit, including waste parts like booster rockets. This is the Space Object Catalog.

All content from Kiddle encyclopedia articles (including the article images and facts) can be freely used under Attribution-ShareAlike license, unless stated otherwise. Cite this article:
Space debris Facts for Kids. Kiddle Encyclopedia.