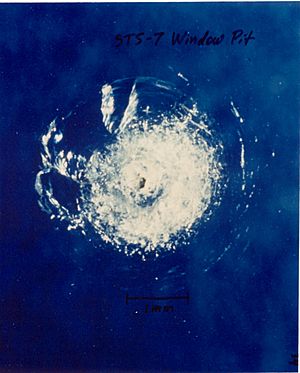 Kessler Syndrome (or an ablation cascade) is a thought-up situation made by the NASA scientist Donald J. Kessler in which the amount of space debris in orbit is large enough to cause space collisions to happen often. This would make space mostly unusable for years if it happened at an extreme level.

There is a satellite in orbit that is large and inactive, making it count as space debris, but it is in an orbit with a large amount of space debris. Two known objects get within 200m of it every year. This could cause a lot of space debris, inducing a domino effect with more collisions.

Satellite manufacturers must demonstrate that their satellite can safely destroy itself or boost itself into a higher or lower orbit, known as a graveyard orbit, to avoid keeping unused satellites in common orbits for other satellites.

All content from Kiddle encyclopedia articles (including the article images and facts) can be freely used under Attribution-ShareAlike license, unless stated otherwise. Cite this article:
Kessler Syndrome Facts for Kids. Kiddle Encyclopedia.