Volkswagen Type 2 is a van made by Volkswagen. They are often painted bright colors. They are also called the Transporter, Kombi, Bus (US) or Camper (UK). 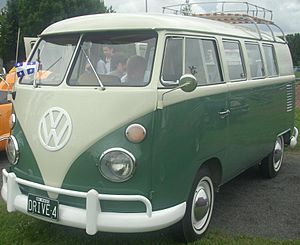 All content from Kiddle encyclopedia articles (including the article images and facts) can be freely used under Attribution-ShareAlike license, unless stated otherwise. Cite this article:
Volkswagen Type 2 Facts for Kids. Kiddle Encyclopedia.