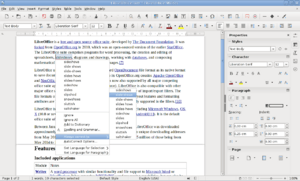 LibreOffice Writer, an example of software.

Computer software, also called software, is a set of instructions and documentation that tells a computer what to do or how to perform a task. Software includes all different programs on a computer, such as applications and the operating system. Applications are programs that are designed to perform a specific operation, such as a game or a word processor. The operating system (e.g. Mac OS, Microsoft Windows, Android and various Linux distributions) is a type of software that is used as a platform for running the applications, and controls all user interface tools including display and the keyboard.

The word software was first used in the late 1960s to emphasize on its difference from computer hardware, which can be physically observed by the user. Software is a set of instructions that the computer follows. Before compact discs (CDs) or development of the Internet age, software was used on various computer data storage media tools like paper punch cards, magnetic discs or magnetic tapes.

Today, software has become an important part of our lives. software is used everywhere. software engineers are responsible for producing fault-free software which has literally become an essential part of our daily lives. Changeability and conformity are two of the main properties of software design. There are also different processing models for designing software including Build and Fix, Waterfall and Agile software processing design methods.

The different types of software can be put into categories based on common function, type, or field of use. There are three broad classifications:

All content from Kiddle encyclopedia articles (including the article images and facts) can be freely used under Attribution-ShareAlike license, unless stated otherwise. Cite this article:
Software Facts for Kids. Kiddle Encyclopedia.