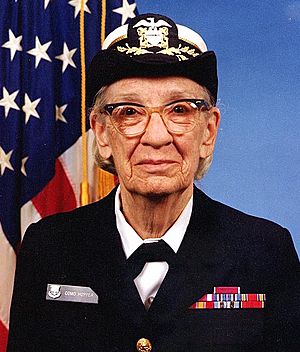 Grace Hopper, the inventor of FLOW-MATIC, a predecessor to COBOL

COBOL is a programming language that was developed in the year 1959. It was one of the first computer programming languages. The name COBOL stands for COmmon Business-Oriented Language. COBOL was created because people wanted a language they could use to describe the problems in a way that is independent of the hardware used. Like SQL COBOL uses a syntax that is close to that of natural languages. As an example, ADD YEARS TO AGE is a valid expression. There are several different versions of COBOL. The newest is from 2002. In general, versions of the language before 1985 are not compatible with the newer versions, from 1985 and later.

All content from Kiddle encyclopedia articles (including the article images and facts) can be freely used under Attribution-ShareAlike license, unless stated otherwise. Cite this article:
COBOL Facts for Kids. Kiddle Encyclopedia.