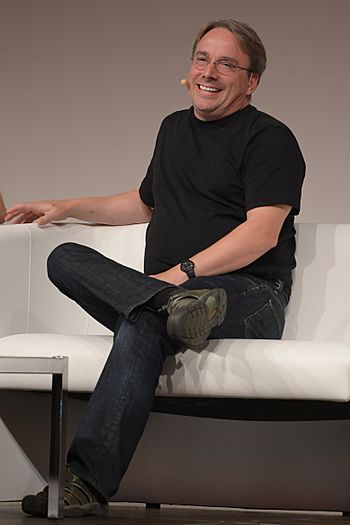 His parents named him after Linus Pauling. He studied at the University of Helsinki from 1988 to 1996. He became famous because of the success of his operating system, Linux. He started making this system as a student project in 1991. He based it on the popular UNIX operating system. Today, Linux has become the most popular free operating system.

Linus is the leader of the Linux project, which has many members around the world. He is the one person who can make decisions about changes or future development on the operating system. He also made the revision control system Git. He now lives with his family in the United States.

Linus chose the penguin to be the logo of Linux. A picture of penguin appears on many desktop computers that run Linux.

All content from Kiddle encyclopedia articles (including the article images and facts) can be freely used under Attribution-ShareAlike license, unless stated otherwise. Cite this article:
Linus Torvalds Facts for Kids. Kiddle Encyclopedia.