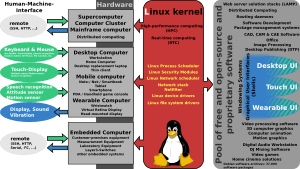 The Linux kernel is on various hardware. It is supported by a lot of free, open-source, and proprietary software

The Linux kernel is released with the GNU General Public License version 2 (GPLv2) and developed by programmers worldwide.

In April 1991, Linus Torvalds, then 21 years old, started working on some simple ideas for an operating system. Then, on 25 August 1991, Torvalds posted to comp.os.minix:

The X Window System was soon moved to Linux. In March 1992, Linux version 0.95 was the first to be capable of running X. This large version number jump (from 0.1x to 0.9x) was because of a feeling that a version 1.0 with no major missing parts would be released soon.

Linus decided, on May 9 1996, to adopt Tux the penguin as mascot for Linux.

Version 2 of Linux, released on June 9, 1996, was a landmark. Strong development continued:

Currently a new kernel version is released in every 2 3/4 months.

In the start, Torvalds released Linux under a license which did not allow anyone to sell it. This was soon changed to the GNU General Public License (GPL), during version 0.12. This license allows distribution and sale of modified and unmodified versions of Linux but requires that all those copies be released under the same license and be accompanied by the complete corresponding source code.

Torvalds has said licensing Linux under the GPL as the "best thing I ever did."

All content from Kiddle encyclopedia articles (including the article images and facts) can be freely used under Attribution-ShareAlike license, unless stated otherwise. Cite this article:
Linux kernel Facts for Kids. Kiddle Encyclopedia.