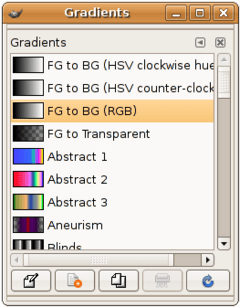 The GNU Image Manipulation Program, or GIMP, is a free software picture maker.

It is often used for making logos, making photographs bigger or smaller, changing colours, making many pictures part of one picture, making pictures nicer to look at, and changing file formats.

GIMP is often used as a free software alternative for the most popular Adobe Photoshop, but it is not made to be an Adobe Photoshop clone. GIMPs mascot is named Wilber.

GIMP was started in 1995 by Spencer Kimball and Peter Mattis and is now taken care of by a group of volunteers as part of the GNU Project. The newest version of GIMP is v.2.8 and it was available since March 2009. GIMPs license is the GNU General Public License, so GIMP is free software.

GIMP can be used for opening and changing many types of file formats. GIMPs own file format is XCF, which is the name of the building where GIMP was written.

Some file formats that GIMP can be used with are bitmap, JPEG, PNG, GIF and TIFF. GIMP can also read and write path information from SVG files and GIMP can read Adobe PDF files and the raw image formats used by digital cameras, but cannot write to these formats.

All content from Kiddle encyclopedia articles (including the article images and facts) can be freely used under Attribution-ShareAlike license, unless stated otherwise. Cite this article:
GIMP Facts for Kids. Kiddle Encyclopedia.