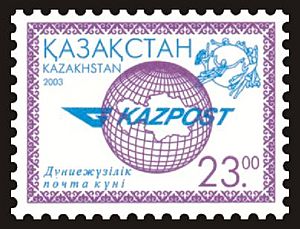 Kazakh is the name of the language of Kazakhstan written in the latin alphabet.

The language of Kazakshtan in central Asia has been written in the Cyrillic alphabet since Russia started to occupy that country in the 19th century.

After WWI in the Turkish countries started a linguistic change to use only the Latin alphabet, promoted mainly by Kemal Atatürk of Turkey. Consequently, from 1927 to 1939 Kazakhstan (then part of the Soviet Union) used the Latin alphabet. But Stalin reinstated in 1940 the Cyrillic in order to impose a russification of soviet central Asia.

In 1991 the newly independent Kazakshtan started to allow the return to the old Latin alphabet, but with the use of the Cyrillic as the primary alphabet.

In 2006 the present president Nazarbajev of Kazakhstan has started a project to substitute Cyrillic with the latin alphabet, in order to officially use Kazakh as the only language of his country after 2020.

The Kazakh Latin alphabet has 38 letters:

All content from Kiddle encyclopedia articles (including the article images and facts) can be freely used under Attribution-ShareAlike license, unless stated otherwise. Cite this article:
Kazakh language Facts for Kids. Kiddle Encyclopedia.