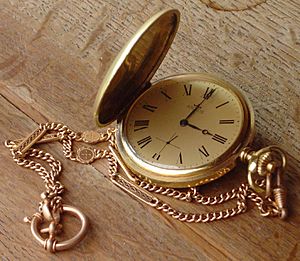 Intelligent design sometimes compares the world to a watch, suggesting that both have a maker. This is known as the watchmaker analogy.

Intelligent design is the theory that that life, or the universe, cannot have arisen by chance and was designed and created by some intelligent entity. It believes that the universe is so complex that it must have been designed by a higher intelligent being. This theory is that life did not evolve by natural selection.

Intelligent design was developed by a group of American creationists to get around legal judgements like Edwards v. Aguillard, which said that creationism could not be taught in schools because of the First Amendment. The first use of the term in this form was in the creationist textbook Of Pandas and People, published in 1989.

Intelligent design suggests that life is too complex to have evolved. Scientists have discovered that even a single cell is complex. The genes in a cell code have a huge amount of information. Therefore that information, like computer programming, has to come from an intelligent source and cannot be made randomly. This is thought to be because the properties of entropy say things cannot grow in complexity by randomness. Law professor Phillip E. Johnson was seen as the father of the intelligent design.

It is also argued that although an amino acid could be made randomly, a protein (a long, shaped string of amino acids) is such a precise sequence and structure that it would be impossible to make by chance. Also, a protein or DNA would not be alive by itself; so a whole life form would have to be made all at once. This argument can be seen as a way of saying that natural selection could not have created life. It is argued whether that is a valid point.

A common example of this is a bacterial flagellum, which is essentially a microscopic animal version of a very efficient electric motor. The flagellum has lots of separate parts. It is argued that for the flagellum to form by evolution, every single one of the parts would have to be formed together at just the right time. However, scientists say this is not correct. There is evidence that the flagellum developed through evolution.

A religious philosopher, William Paley, said that life is more complicated than a machine (like as a watch.) He said that just like a watch was made by a smart designer, so were animals. This is known as the watchmaker analogy.

Similarities and criticism of Intelligent Design

Many parts of different animals are very similar. Intelligent design could show that a common creator used the same good design ideas for all of them. This could be evidence of evolution; but intelligent design suggests that every part of an animal is useful and there for a reason, showing how smart the designer was.

Evolution suggests that many parts of the same animal would not be useful or not good, because it happened by natural selection. In the past, it was believed that some parts of the human body have no biological function, but later it was proved that some actually do important things.

If animals and persons have similar parts because they came from a common ancestor, then the genes that code for these parts should be similar too. Sometimes this is true. But, other times similar structures are coded by entirely different genes, because of convergent evolution. These examples of this kind of different results in data can be used to claim that evolution is either wrong or right, causing arguments.

All content from Kiddle encyclopedia articles (including the article images and facts) can be freely used under Attribution-ShareAlike license, unless stated otherwise. Cite this article:
Intelligent design Facts for Kids. Kiddle Encyclopedia.