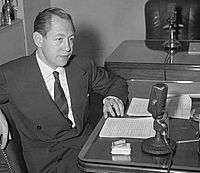 William Samuel Paley (September 28, 1901 – October 26, 1990) was an American businessman, philanthropist, broadcaster and founder of CBS. A Chicago-born cigar salesman, in 1928 he purchased a small group of radio stations. From that start he built CBS into a dominant force in radio and television.

All content from Kiddle encyclopedia articles (including the article images and facts) can be freely used under Attribution-ShareAlike license, unless stated otherwise. Cite this article:
William S. Paley Facts for Kids. Kiddle Encyclopedia.