Gilligan's Island is a 1964 American television series. The series is about seven people (two crew members and five tourists) who take a 3-hour sightseeing tour from a marina in Hawaii. This occurs on the boat, S.S. Minnow. An unexpected storm sends the boat to an uncharted island. Now, the passengers of the boat have to live on the island and try to find a way home. Most of the episodes involved the characters trying to survive a problem or trying to contact help.

Gilligan's Island ran for a total of 98 episodes. The first season, consisting of 36 episodes, was filmed in black and white. These episodes were later colorized for syndication. The show's second and third seasons (62 episodes) and the three television movie sequels (aired between 1978 and 1982) were filmed in color.

The show received solid ratings during its original run, then grew in popularity during decades of syndication, especially in the 1970s and 1980s when many markets ran the show in the late afternoon. Today, the title character of Gilligan is widely recognized as an American cultural icon.

The two-man crew of the charter boat SS Minnow and five passengers on a "three-hour tour" from Honolulu run into a tropical storm and are shipwrecked on an uncharted island somewhere in the Pacific Ocean. 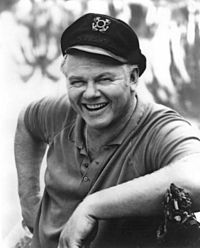 Alan Hale Jr. as the Skipper 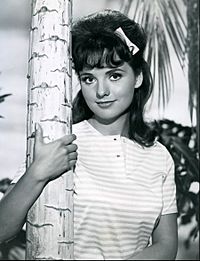 All content from Kiddle encyclopedia articles (including the article images and facts) can be freely used under Attribution-ShareAlike license, unless stated otherwise. Cite this article:
Gilligan's Island Facts for Kids. Kiddle Encyclopedia.