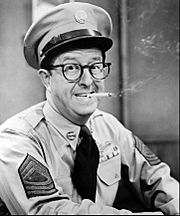 Phil Silvers (Philip Silver, May 11, 1911 – November 1, 1985) was an American entertainer, comedian, movie, television, stage, radio, and voice actor who is known for his role as Sergeant Bilko in The Phil Silvers Show. He has won two Tony Awards and an Emmy Award.

All content from Kiddle encyclopedia articles (including the article images and facts) can be freely used under Attribution-ShareAlike license, unless stated otherwise. Cite this article:
Phil Silvers Facts for Kids. Kiddle Encyclopedia.