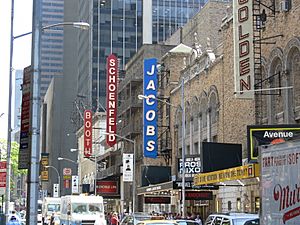 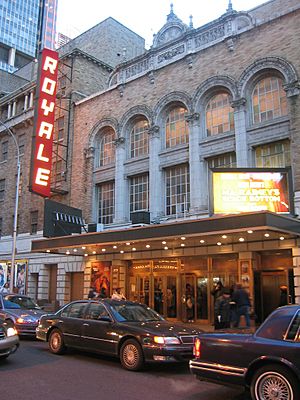 Designed by architect Herbert J. Krapp, and built by the Chanin Construction Company, it opened as the Royale Theatre on January 11, 1927, with a musical entitled Piggy. Produced by William B. Friedlander, Piggy had a weak script, but the popular comedian Sam Bernard played the starring role and carried the show for 79 performances. Bernard died soon after the show closed. Built as part of a three theater complex, alongside the 800-seat Theatre Masque, the 1,600-seat Majestic, and the Lincoln Hotel (now the RowNYC Hotel and previously the Milford Plaza Hotel), the theater features an ornate stone facade, with vaulted large windows above the street frontage. The landmarked interior features murals by Willy Pogany and one balcony level all under an expansive vaulted plasterwork ceiling. With a seating capacity just over 1,100, the theater has been home to both plays and musical productions in its ninety-year history.

Producer John Golden leased the theatre and renamed it for himself from 1932 to 1937 (when he moved to the Theatre Masque next door). The Shubert Organization then assumed ownership and initially leased the theatre to CBS Radio. In 1940, the Royale was restored to use as a legitimate theatre under its original name. On May 9, 2005, it was renamed for longtime Shubert Organization president Bernard B. Jacobs.

Once achieved the box office record for the Bernard B. Jacobs Theatre. The production grossed $1,447,598 over nine performances, for the week ending December 30, 2012.

All content from Kiddle encyclopedia articles (including the article images and facts) can be freely used under Attribution-ShareAlike license, unless stated otherwise. Cite this article:
Bernard B. Jacobs Theatre Facts for Kids. Kiddle Encyclopedia.