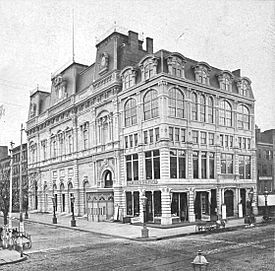 Booth's Theatre, on the southeast corner of 23rd Street and 6th Avenue, was demolished in 1965. 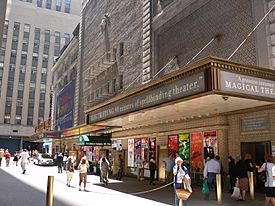 Named in honor of famed 19th-century American actor Edwin Booth, brother of John Wilkes Booth, the theater's 783-seat auditorium was intended to provide an intimate setting for dramatic and comedic plays. It opened on October 16, 1913, with Arnold Bennett's play "The Great Adventure."

The venue was the second New York City theatre to bear this name. The first, Booth's Theatre, was originally owned by Edwin Booth, and built by the architectural partnership Renwick & Sands between 1867 and 1869 on the corner of 23rd Street and 6th Avenue (see picture, below).

The Booth Theatre appeared in The West Wing episode Posse Comitatus as venue for a fictitious charity performance of War of the Roses which President Jed Bartlet attended during the assassination of the Qumari Defence Minister Abdul ibn Shareef.

The box-office record was broken in 2013 by Bette Midler in I'll Eat You Last: A Chat with Sue Mengers with a gross of $753,217 in just seven performances. Midler then broke her own record the week following with a gross of $865,144. The revival of The Elephant Man, starring Bradley Cooper, topped Midler's record by grossing $1,058,547 for an eight-performance week ending December 28, 2014. The current record is held by the 2018 revival of The Boys in the Band. The production grossed $1,152,649 over eight performances for the week ending August 12, 2018.

All content from Kiddle encyclopedia articles (including the article images and facts) can be freely used under Attribution-ShareAlike license, unless stated otherwise. Cite this article:
Booth Theatre Facts for Kids. Kiddle Encyclopedia.