Alfred Davis Lunt Jr. (August 12, 1892 – August 3, 1977) was an American stage director and actor who had a long-time professional partnership with his wife, actress Lynn Fontanne. Broadway's Lunt-Fontanne Theatre was named for them. Lunt was one of 20th century Broadway's leading male stars.

Lunt received two Tony Awards, an Academy Award nomination for Best Actor for 1931's The Guardsman and an Emmy Award for the Hallmark Hall of Fame's production of The Magnificent Yankee.

He became a star in 1919 as the buffoonish lead in Booth Tarkington's play Clarence, but soon distinguished himself in a variety of roles. The roles included the Earl of Essex in Maxwell Anderson's Elizabeth the Queen, a song-and-dance man touring the Balkans in Robert E. Sherwood's Idiot's Delight, a megalomaniacal tycoon in S.N. Behrman's Meteor, and Jupiter in Jean Giraudoux's Amphitryon 38. His appearances in classical drama were infrequent, but he scored successes in Shakespeare's The Taming of the Shrew and Chekhov's The Seagull (in which Lunt played Trigorin, his wife played Arkadina, and Uta Hagen made her Broadway debut in the role of Nina). He was described by director and critic Harold Clurman as "universally acclaimed the finest American actor in the generation which followed John Barrymore; the Lunts are absolute angels."

Lunt was born in Milwaukee, Wisconsin in 1892 to Alfred D. Lunt and Harriet Washburn Briggs. With the exception of his paternal grandmother, who was of Scottish descent, his ancestors were of colonial Maine and Massachusetts stock. His father was descendant of Henry Lunt, an early settler of Newbury, Massachusetts.

His mother had several New England ancestors, including Mayflower arrivals. After his father, who was in the lumber business, died in 1893, Alfred's mother remarried Finnish-born physician Dr. Karl Sederholm and had another son and two daughters. The Sederholms moved to Genesee Depot, Wisconsin. Lunt later attended Carroll College in Waukesha, Wisconsin. 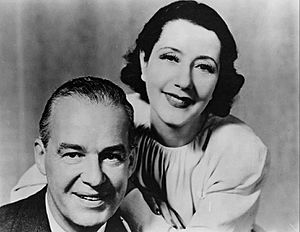 He and his wife Lynn Fontanne, whom he married on May 26, 1922, in New York City, were the pre-eminent Broadway acting couple of American history. Secure in their public image as a happily married couple, they could play adulterers, as in Robert Sherwood's Reunion in Vienna, or as part of a ménage à trois in Noël Coward's Design for Living. (The latter, written for the Lunts, was so risqué, with its theme of bisexuality and a ménage à trois, that Coward premiered it in New York, knowing it would not survive the censor in London.) The Lunts appeared together in more than 20 plays. They also were featured posthumously on an American postage stamp.

The couple made three films together: Second Youth (1924), The Guardsman (1931), in which they starred, and Stage Door Canteen (1943) in which they had cameos as themselves. In 1958, they retired from the stage. They starred in several radio dramas for the Theatre Guild in the 1940s and starred in a few television productions in the 1950s and 1960s.

Summers, during their days of performing on stage and their retirement years, were spent at their home Ten Chimneys in Genesee Depot, Wisconsin.

In 1947, Lunt was presented with the American Academy of Arts and Letters Medal for Good Speech on the Stage.

In 1964, Lunt and Fontanne were presented with the Presidential Medal of Freedom by President Lyndon Johnson.

Like Lynn Fontanne, Alfred Lunt is represented in the American Theatre Hall of Fame. 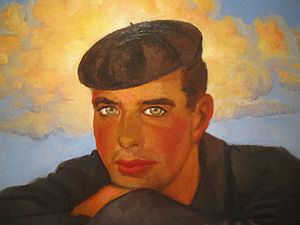 Lunt as he appears at the National Portrait Gallery in Washington, D.C.

Alfred Lunt died August 3, 1977, nine days before his 85th birthday, in Chicago from cancer. He is buried next to his wife at Forest Home Cemetery in Milwaukee, Wisconsin. He was the third person for whom the house lights were dimmed in all Broadway theaters following his death.

Ten Chimneys, Lunt and Fontanne's estate in Genesee Depot, currently is a house museum and resource center for theater. The Lunt-Fontanne Theatre in New York City was named in honor of Lunt and his wife.

The Lunts made multiple appearances on the radio series Theater Guild on the Air (also known as United States Steel Hour). These programs are hour-long adaptations of famous plays. The couple performed together eight times on the program, and each appeared three times without the other. Recordings of most of these episodes still exist unless noted presumed lost.

All content from Kiddle encyclopedia articles (including the article images and facts) can be freely used under Attribution-ShareAlike license, unless stated otherwise. Cite this article:
Alfred Lunt Facts for Kids. Kiddle Encyclopedia.