The Taming of the Shrew facts for kids 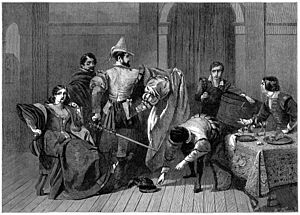 The Taming of the Shrew is a play by William Shakespeare. It is a comedy. Shakespeare's source was Suppositi (1509) by Ludovico Ariosto. George Gascoigne's play Supposes (1566) may have also been used. The play was probably first acted between 1593 and y first printed in 1623 in the First Folio. The musical, Kiss Me Kate, was based on the play. Elizabeth Taylor and Richard Burton made a movie of the play.

All content from Kiddle encyclopedia articles (including the article images and facts) can be freely used under Attribution-ShareAlike license, unless stated otherwise. Cite this article:
The Taming of the Shrew Facts for Kids. Kiddle Encyclopedia.