The Federal Communications Commission (FCC) is an independent agency of the United States government. It was created by the United States Congress (Communications Act of 1934) to regulate communications. This includes radio, television, wire, satellite, and cable in all 50 states, the District of Columbia and U.S. territories. While it is an independent agency, the FCC does report to Congress. The FCC took over wire communication regulation from the Interstate Commerce Commission in 1934. 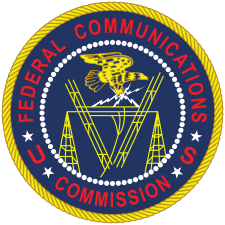 Seal of the US Federal Communications Commission

The FCC has five commissioners who are appointed by the President of the United States. Their 5-year appointment is confirmed by the Senate. One commissioner is selected to serve as chairperson by the president. The rules state that only three of the five may be from the same political party. No commissioner may have any financial interest in any business regulated by the FCC.

The FCC is organized into bureaus.

All content from Kiddle encyclopedia articles (including the article images and facts) can be freely used under Attribution-ShareAlike license, unless stated otherwise. Cite this article:
Federal Communications Commission Facts for Kids. Kiddle Encyclopedia.